Categories
In the News 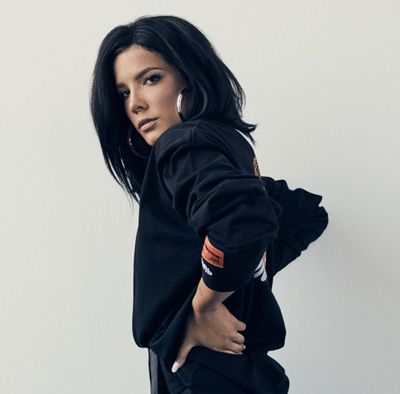 GRAMMY Award-nominated, multi-platinum alternative pop maverick Halsey has been hailed by Billboard Magazine, Forbes, and MTV as “the voice of her generation.” But just a few years ago Halsey was still Ashley Nicolette Frangipane, a New Jersey teen who’d escaped her chaotic family life for New York, writing poetry, and scrounging money for concerts and her next slice of pizza.

In 2014 she recorded a song called “Ghost” about her junkie ex-boyfriend and put it on SoundCloud. It blew up online and record labels came calling—overnight. It wasn’t long before she signed to Astralwerks and began opening on major tours for the likes of The Weeknd.

After her EP, Room 93, Halsey released her first full-length album, Badlands, which debuted at number two on the Billboard charts in August 2015. The album went platinum and scored more than two billion streams, and Halsey was the most tweeted artist at both SXSW and Coachella.

She has since sold out performances at venues on five continents, including Madison Square Garden. She won the 2016 Breakthrough Artist Award at Music Biz, spoke up for disenfranchised teens at the United Nations, and trended worldwide on Twitter 14 times. She performed at the American Music Awards, with Bono on Jimmy Kimmel Live to benefit the (RED) Foundation, and with Justin Bieber on The Today Show.

Halsey closed out 2016 with an emotional performance at the Nobel Peace Prize Concert. Accompanied by an orchestra, she made a statement with her jacket emblazoned with “20:1”—representing the ratio of male-to-female Nobel Prize recipients. She began 2017 on the cover of Forbes magazine’s 30 Under 30 issue alongside Michael Phelps.

Now 23, Halsey talks openly about mental illness, race, queerness, and sexuality.  She has also been incredibly open about her own battle with endometriosis, paving the way for so many women to understand their own experience with this chronic pain. Her inspiring message following surgery was a bright light for us all:

“IF YOU SUFFER FROM CHRONIC PAIN OR A DEBILITATING DISEASE PLEASE KNOW THAT I HAVE FOUND TIME TO LIVE A CRAZY, WILD, REWARDING LIFE AND BALANCE MY TREATMENT AND I HOPE SO MUCH IN MY HEART THAT YOU CAN TOO”.

She has raised money and awareness for LGBT ally organizations; for My Friend’s Place, an L.A.- based homeless youth organization; and for GLSEN, an organization that helps LGBT kids in school. In January 2017 Halsey participated in the Women’s March in D.C. and donated $100,000 to Planned Parenthood, thanks to her Twitter fans. These are just a few of the reasons why she’s as much of a badass offstage as on.

Lone Hummelshoj is well known as an advocate in the field of endometriosis, in particular for her work in getting the disease recognised at policy level. She originally made history in 2002 when she was instrumental in the implementation of the first (and only) national legislation, which provides referral guidelines to centralised specialist centres for the treatment of endometriosis in Denmark recognising the need for highly skilled expertise in the management of the endometriosis. She made history again when, in 2006, endometriosis was added to the working agenda of the European Commission, which consequently funded an endometriosis project through its Public Health Programme in May 2007. Lone addressed 100 female state legislators in Washington DC in 2011, highlighting the personal and societal burden of endometriosis, and is presently a member of the Women’s Health All Party Parliamentary Working Group in the UK.

On behalf of WES Lone project managed the first global effort to reach consensus on the management of endometriosis, as well as four subsequent consensuses on: classification, diagnosis, patient centred outcomes, and centres/networks of expertise and specialist care. These initiatives now involve 38 national and international stakeholder organisations across the world. She also project managed four international workshops agreeing to research priorities in endometriosis, has overseen four successful World Congresses on Endometriosis, and is working with the ESGE and ESHRE to provide practical guidelines on the surgical management of endometriosis.

On behalf of WERF Lone has raised more than a million euros to conduct multiple ground breaking studies to prospectively establish the significant burden of endometriosis on women’s lives in order to justify legislative funding for basic research into disease mechanisms and targeted treatments. She coordinated the global effort to develop standardised patient and surgical data collection tools and harmonisation of SOPs in the collection of biospecimens to enable large-scale, cross-centre, epidemiologically robust research into the causes of endometriosis, novel diagnostic methods, and better treatments. The resulting WERF EPHect tools presently are being translated into ten additional languages under her supervision and are currently adhered to in 18 collaborating institutions contributing for the first time to large, comparable, data-sets in endometriosis research (and validation thereof).

Lone co-founded the Danish Endometriosis Society in 1997, chaired it for seven years, where she oversaw two innovative national awareness campaigns and secured close collaboration between “physicians” and “patients” – in addition to securing the above-mentioned legislation for national referral centres for specialist care.

LONE HAS PRESENTED ACROSS THE GLOBE ON THE IMPACT AND BURDEN OF ENDOMETRIOSIS, IS REGULARLY UTILISED AS A SESSION/MEETING ORGANISER AND CHAIR, AND HAS AN IMPRESSIVE LIST OF PUBLICATIONS FOR A LAYPERSON. SHE IS ACTIVE IN THE AAGL, ESHRE, AND ASRM SPECIAL INTEREST GROUPS ON ENDOMETRIOSIS; A MEMBER OF THE ROYAL SOCIETY OF MEDICINE; AN AD HOC PEER REVIEWER FOR FIVE SCIENTIFIC JOURNALS; AND IS ON THE FACULTY OF F1000 MEDICINE FOR WOMEN’S HEALTH.

Lone Hummelshoj has a background in sales and marketing (13 years with IBM – managing large clients within the financial services sector in Europe), and has worked as a freelance business development consultant since 1996, specialising in strategic marketing, project management, and facilitation.

A celebrated journalist, Mara has covered nearly every major news story of the last decade, most recently as a correspondent for ABC News’ Good Morning America. She has received numerous accolades and awards, including Emmy Awards for Outstanding Morning News Program (Good Morning America, 2016), the Boston bombing manhunt (NBC News, 2013), and the 2008 Presidential election (NBC News). In 2007, she became the first broadcast journalist ever honored with the National Association of Black Journalists’ prestigious Emerging Journalist of the Year Award. Over the years she has also won an astounding seven Telly Awards and a NY State Broadcasters Association Award for Outstanding Hard News.

Prior to joining ABC News in February 2014, Mara was a correspondent for NBC News as well as the anchor of “Early Today” on the NBC network and “First Look” on MSNBC. Mara has also worked as an international contributor and commentator for numerous news outlets and websites, including The Oprah Winfrey Show, Current TV, Yahoo!, NPR, Ebony magazine, UPTOWN magazine and more. 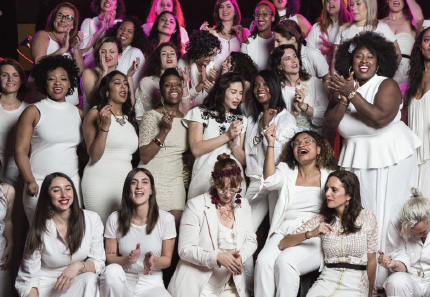 Fresh off their inspiring performance with Kesha at the Grammy Awards and a recent collaboration with Philip Glass and Carly Simon at Carnegie Hall, the Resistance Revival Chorus only grows louder since their first public appearance as a flash mob in Times Square in July 2017. The Resistance Revival Chorus is a collective of more than 60 women who join together to breathe joy and song into the resistance, and to uplift and center women’s voices. The great artist and activist Harry Belafonte once said, “when the movement is strong, the music is strong.” In that spirit, the Resistance Revival Chorus hosts a series of regular musical events, Resistance Revival Nights, where the community gathers to rejuvenate our spirits and honor the protest songs that have historically been central to civil rights movements. We believe that art and culture are essential to changing hearts, minds, and history; and we commit to the principle that joy is in itself an act of resistance. 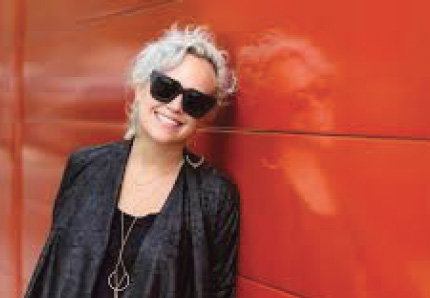 Ginny Suss is the former tour manager for The Roots and one of the organizers and producers of the Women’s March in Washington, DC. She helped co-found the Resistance Revival Chorus and until recently was the VP of Okayplayer, the original progressive urban music site and the premier digital destination for music connoisseurs worldwide. She also co-founded OkayAfrica. As a video producer, Ginny oversaw Okayplayer + OkayAfrica’s original video content, and created and produced many original series, including the animated Storyville now up on TBS.com, Okay Acoustic, Player Xchange, The Roots Of series, in addition to creative agency and brand video work. With expertise in event production, Ginny has helped to produce annual events such as The Roots Picnic, the Okayplayer Holiday Jams featuring The Roots, in addition to Okayplayer’s SXSW events, annual partnerships with Summerstage, Lincoln Center Out Of Doors, OkayAfrica’s launch at Celebrate Brooklyn in Prospect Park and more. She’s also known for her photography, particularly focused on live musicians and musical events. 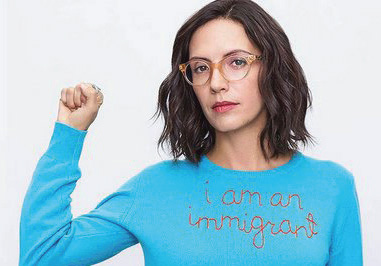 Paola Mendoza is a film director, activist and author. She was a national organizer and the Artistic Director for the Women’s March on Washington, the largest protest in recorded history.

For her day job, Paola is a critically acclaimed film director. Her films have continually tackled the effects of poverty and immigration on women and children in the United States. Her award-winning movies have premiered at the most prestigious film festivals around the world. She was named one of Filmmaker Magazine 25 New Faces of Independent Film and she is a Tribeca All Access, Film Independent and Independent Film Week fellow. She is a co-founder of The Soze Agency and has been the creative director for campaigns fighting for immigration reform, criminal justice reform, incarcerated mother’s and women’s rights.

She is a co-founder and member of the critically acclaimed, Resistance Revival Chorus. Most recently she co-authored the New York Times best seller, Together We Rise. 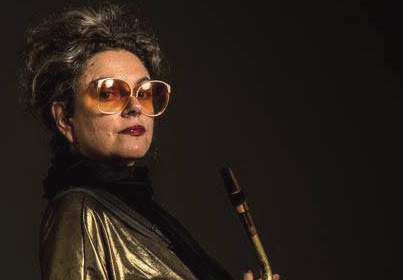 Moist Paula, so named for her legendary turn of the century instrumental rock trio Moisturizer, is an Australian saxophonist and composer who has been based in NYC since the mid 90s. Known mostly for her work on bari sax, she has toured internationally with Melvin Van Peebles, Nick Waterhouse, Burnt Sugar Arkestra and C.W. Stoneking. At home in NYC she has maintained a weekly gig since 1997 with Reverend Vince Anderson and his Love Choir, fronted her own projects Moisturizer and Secretary and recorded and performed live and on TV with dozens of artists in many styles, including The Roots, Irma Thomas, HAIM, TV on the Radio, Gogol Bordello,Smokey Robinson and Binky Griptite of The DapKings, all the while composing and recording original ambient electronica on EWI (Electronic Wind Instrument). Moist Paula’s Bliss Station is an elegant jazzy combo led by Moist Paula on baritone sax, and comprising long time members of her extended musical family, which performs standards from the American Songbook, instrumental covers of contemporary popular music and Moist Paula’s original compositions.